To share your memory on the wall of Todd Higley, sign in using one of the following options:

Provide comfort for the family of Todd Higley with a meaningful gesture of sympathy.

We encourage you to share your most beloved memories of Todd here, so that the family and other loved ones can always see it. You can upload cherished photographs, or share your favorite stories, and can even comment on those shared by others.

Posted Sep 21, 2019 at 11:19am
I miss you grandpa. I think of you everyday poppy. I HOPE heaven is nice and that your waiting for us all poppa. i miss being able to watch star trek and having company that was quiet. i love you poppa
Comment Share
Share via:

Posted Sep 08, 2019 at 11:57pm
Daddy, I miss you every day. You believed in me. You made me feel strong thru anything. I still don't know what to do without your genuine understanding and love.
Comment Share
Share via:

Posted May 28, 2019 at 01:27am
My old man
thank you for always encouraging me and always showing me how proud you were of me. This is not goodbye it’s I’ll see ya later
No tears
Love you pop

Posted May 26, 2019 at 04:42pm
Rest in Peace Todd. Thank you for your service to the country, your friendly spirit, and for your volunteer service with the VFW. 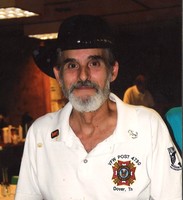