To share your memory on the wall of Katy Luton, sign in using one of the following options:

Receive notifications about information and event scheduling for Katy

We encourage you to share your most beloved memories of Katy here, so that the family and other loved ones can always see it. You can upload cherished photographs, or share your favorite stories, and can even comment on those shared by others.

Posted Apr 30, 2020 at 04:02pm
My condolences to Miss Katy's family on the passing of this beautiful soul. I came to know Miss Katy when I joined Lesa Fitzhugh's monthly visit for the residents at Diversicare. Though she often sat silent as we shared in familiar hymns, when our eyes would meet and hold even briefly she would respond by singing along, and she knew all the words. Always we would hug and share an I love you. I was blessed to have known Miss Katie and have her in my life even briefly; you were all surely blessed to know her all your life! May she rest in His eternal Home.
Comment Share
Share via:

Posted Apr 30, 2020 at 11:54am
I loved the simple tasks of taking care of my residents. For Mrs. Katy Luton, it was during supper time. Andy Griffith would be on the TV. I am going to miss you Mrs. Katy, and I would also say I am so sorry to the family. God Bless this family.
Comment Share
Share via: 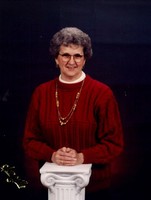