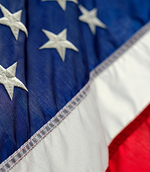 Mr. J.P. McGee, age 93, of Murray, Kentucky, passed away Friday, October 18, 2019. He was born October 1, 1926 in Stewart County, Tennessee, son of the late Ernest Landis and Emma Causey McGee. Mr. McGee retired from the military after 20 years of service to his country. He served in the U.S. Army and the U.S. Air Force, and was a veteran of WWII, the Korean War, and the Vietnam War. Mr. McGee also worked 20 years with the United States Post Office in Murray, Kentucky before he retired from that position.
In addition to his parents, he is preceded in death by his wife, Marcene Blane, sisters, Margaret McGee Watson and Thedis McGee Abernathy.
Survivors include his brother, William Edward McGee, Nashville, TN, sister, Mildred McGee Shoultz, Canton, KY, and several nieces and nephews.
The funeral service will be at 1:00pm on Monday at Anglin Funeral Home with Marty Blane officiating. Burial with military honors will follow in the Hillcrest Cemetery. Visitation will be from 5:00 – 7:00 pm on Sunday at Anglin Funeral Home and from 12:00 pm until the time of service on Monday.
Anglin Funeral Home is in charge of arrangements.