To share your memory on the wall of Eugene Singer, sign in using one of the following options:

To plant a memorial tree in honor of Eugene Singer, please visit our Heartfelt Sympathies Store.

We encourage you to share your most beloved memories of Eugene here, so that the family and other loved ones can always see it. You can upload cherished photographs, or share your favorite stories, and can even comment on those shared by others.

Posted Jul 26, 2019 at 01:23pm
Hi, my name is Carol and I live just down the road from Cathy, Todd and beloved Poppy. I have known them since I began attending St. Francis of Assisi roughly 6 years ago. I have lived by them for 2 years now and I have to say having known Poppy has been a blessing to me because of his funniness, loving, caring ways, happy all the time no matter whether he was sick or not. He always made me laugh whenever I saw him. Of course Cathy is just like him too and I truly believe and have to say that please if you truly love and care for them and always your family of your owner as well as close friends, please don't allow the days, weeks, or even months go by without seeing or talking with them. I am so sorry for your loss Cathy and to your family. I am so sorry for not have come to see Poppy early Monday morning as well as not having been taking the time to go and see him and you all over the past well...anyhow I want to just say that I truly love you Poppy you may now be gone, but you will never be forgotten, always in my heart and always on my mind. We will all meet again when the time comes and see each other, but as you are with the Lord in Heaven please save some fishing time for me too one thing I never got to talk or even do with you, but we will some day in Heaven. I love you so much Poppy. Thank you also for serving our Country and Keeping us Safe. May you Rest In Peace in the Arms of Jesus and also please help him watch over our blessed furbabies and pop and all those who have passed on before us. To a wonderful and blessed man!!! God Bless You poppy always love you, Love from Carol, the "lady who lives in Barbara's house"
Comment Share
Share via: 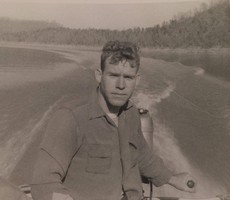