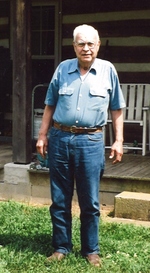 Mr. Charles Weldon ‘Skud’ Settle, age 89 of Dover, TN, passed away Sunday, May 12, 2019. He was born April 15, 1930 in Stewart County, Tennessee son of the late James “Ray” Raymond Settle and Katie Bell Byrd Settle. Mr. Charles was a retired carpenter and served in the U.S. Army during the Korean War.

In addition to his parents he is preceded in death by his beloved wife, Donna Anderson Settle, and his brothers, Morris and Houston Settle.

The funeral service will be at 1:00 pm Friday, May 17, 2019 at Anglin Funeral Home with Bro. Carl Newberry officiating. Burial with military honors will follow at Stewart County Memorial Gardens. Visitation will be from 6:00 – 8:00 pm on Thursday, May 16, 2019 and from 12:00 until the time of service on Friday. Pallbearers will be Larry Cole, Wade Settle, Jim Hanson, Steve Fielder, Donnie Burkhart, and Jerry Largent.

The family requests memorials to be made to the American Heart Association.