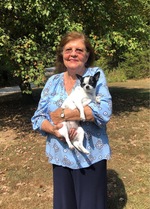 Carol was a member of Big Rock Baptist Church; she was active in both the Stewart County Historical Society and the Stewart County Humane Society. She was a devoted wife, mother, and grandmother whose determination and drive was the foundation of her family.

In addition to her parents, she is preceded in death by her beloved husband, Johnny Ray Sexton, infant son, Gary Randolph, and granddaughter, Jessica Wyatt.

The family requests that all who are comfortable attending will please wear a mask and utilize hand sanitizer.

Memorials in Carol’s memory may be made to the Stewart County Humane Society.