To share your memory on the wall of Bennie Priddy, sign in using one of the following options:

Provide comfort for the family of Bennie Priddy with a meaningful gesture of sympathy.

We encourage you to share your most beloved memories of Bennie here, so that the family and other loved ones can always see it. You can upload cherished photographs, or share your favorite stories, and can even comment on those shared by others.

Posted Feb 19, 2020 at 01:31am
God bless Ben and his family. The Soldiers of 5th Group miss you and we honor your legacy of service. Thank you and may you rest in God's peace.
BK Family
Ft Gordon GA
Comment Share
Share via:
MG

Posted Feb 22, 2019 at 06:55am
For my precious sister, Ann; I am so very sorry for the loss of your soul mate and husband. Your beautiful Ben added such a light to your eyes, and joy to your heart! May the love of our Heavenly Father hold and comfort you now and always! We love you so very much!
Comment Share
Share via:
PP

Posted Feb 21, 2019 at 11:49am
I am so proud to call Paul my cousin. I wish I could have spent more time with him, I will always treasure our conversations and laughing over amusing stories. You were one of a kind cuz! Thank-you for your service sir! We are all blessed to have shared a life with you. Love you always!
Comment Share
Share via:
RP

Posted Feb 21, 2019 at 10:14am
My cousin Ben (Paul to us) was always my hero. I remember him coming by our house in Big Spring while he was on leave during the Vietnam war. He loved my father and mother (Don and Helen Priddy). He often sent me some of his old patches, and one time he bought me a model of the Huey Cobra helicopter that he flew (and stayed up most of the night making it for me). He even let me put his helmet on. In the last ten years we reconnected and I treasure the times we spent together. Beyond being a professional soldier he was a first class historian and we had great conversations. He told me stories of what war is really about and it constantly reminded me of the cost. This country needs more heroes like Paul! Thank you for your service, cuz. I love you and will miss the conversations we've had over the years.
Comment Share
Share via: 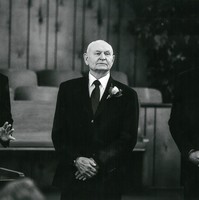