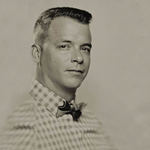 Anthony “Tony” Michael Goodwin, 39, of Austin, TX, passed away on June 4th, 2020.
A Memorial Service will be held at 1pm on June 27th, 2020 at Anglin Funeral Home in Dover, Tennessee. Pastor Del Morgan of Bethel First Church of God will be officiating. A Celebration of Life will be held in Austin, Texas details to follow. Information can be found at tonygoodwin.net.
Tony was born in Elmhurst, Illinois on March 2nd, 1981 to Mike and Kay (Pennyan) Goodwin. He graduated from Stewart County High School in Dover, TN. He went on to receive a Bachelor of Fine Art in Media & Animation from The Illinois Institute of Art – Schaumburg in Schaumburg, Illinois.
Tony married Coty Lee (Zehr) on May 25th, 2008; they were married for 12 years. Together, Coty & Tony lived in Roselle, IL before moving to Austin, TX ten years ago. They loved being entertained by their two shih tzus Wicket Fisticuffs (12) and Gonzo Barkley (10). During their marriage they loved to travel; exploring places like Big Bend National Park, Munich, the UK, Italy, Prague, and Vienna. Nothing made a trip better than eating, drinking, and seeing the countryside by train together.
Tony worked as a Senior 3D Character Modeler for 10 years at Twisted Pixel Games, where he loved his job and colleagues. With their support he continued his education with supplemental classes throughout his career. Tony had a larger than life personality. Known for his infectious laughter and uproarious voice, he was often considered the ‘Life of the Party’. He enjoyed spending time on the water in Central Texas fishing for bass or floating the river. Cooking was his passion and one of the many ways he showed love for his family and friends. He enjoyed entertaining and telling stories over a delicious meal. Tony also loved cycling, owning 5 bicycles for all types of riding. He was a member of the bicycling club “The Skellies” and did numerous long-distance rides, the longest being the 100 mile Shiner ride, which he did twice. Tony was an avid fan of roller derby in Chicago and Austin. In 2011 he was a founding member #01 of the Texas Rollergirls Hell Marys Fan Club and used his voice and vuvuzela to support his favorite teams.
Tony is survived by his wife, Coty, his parents, Mike and Kay, and his brother Danny Goodwin.